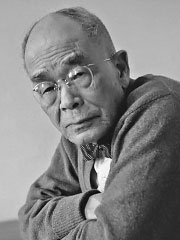 Daisetz Teitaro Suzuki (October 181870, Kanazawa, Japan — July 22, 1966; standard transliteration: Suzuki Daisetsu, 鈴木大拙) was a famous author of books and essays on Buddhism and Zen that were instrumental in spreading interest in Zen to the West.

His brother, a lawyer, financed his life and education in Tokyo at Waseda University. During this time (1891), he also entered spiritual studies at Engaku-ji in Kamakura initially under Kosen Roshi; then, after Kosen’s death, with Soyen Shaku. Soyen was an exceptional Zen monk. In his youth, Kosen and others recognized him to be naturally advantaged. Three years after he had received «Dharma transmission» from Kosen at age 25, Soyen took the unique step of traveling to Ceylon to study Pali and Theravada Buddhism and live the alien life of the bhikkhu for three years.

Still a professor of Buddhist philosophy in the middle decades of the twentieth century, Suzuki wrote some of the most celebrated introductions and overall examinations of Buddhism, and particularly of its Chinese Chan school (though he usually referred to this sect by the term «Zen,» which is the Japanese pronunciation of its name). He went on a lecture tour of American universities in 1951, and taught at Columbia University from 1952-57.

Suzuki subscribed to the idea that religions are each a sort of organism, an organism that is (through time) subject to «irritation» — hence, showing the capacity to change or evolve.