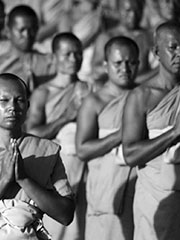 The adherents of Buddhism, monks and laypeople alike are known as Buddhists.

Numbering over 350 million people, Buddhists spread all over the nations of South East Asia, the Indian subcontinent, China, Korea and Japan. Small Buddhist communities are also found in Western Europe and North America.

The following is a comprehensive aspect of the dominant forms of Buddhism along with the primary regions with which they are associated.

At the present time the teachings of all three branches of Buddhism have spread throughout the world and are now easily available in western countries, and increasingly translated into local languages.

It is believed that China is the only country where all of the major sects of Buddhism have significant numbers of followers.