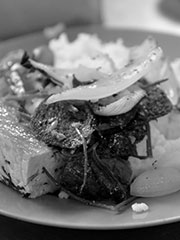 Buddhist cuisine is a kind of cuisine mainly for the believers of Buddhism.

It is known as zhāi cài (zhāi means «purification» or «discipline», cai means «cuisine» or «vegetable») in China, and shōjin ryōri (shōjin means «devotion», ryōri means «cuisine» ) in Japan, and by many other names in other countries.

Reincarnation is one basic tenet of Buddhism, and this includes rebirth of humans as other animals, and vice-versa. As a result, many Buddhists do not kill animals and many also do not eat meat. Other common reasons cited are that killing animals and/or eating their meat are a violation of the Five Precepts, bad for one’s own karma, and because of a compassion for other animals. Many vegetarian Buddhists are not vegan, but for those who are vegan, such beliefs are often due to objections about the circumstances in which the animals producing products such as milk and eggs are raised.

Some Mahayana Buddhists in China and Vietnam also avoid eating strong-smelling plants such as onion, garlic, chives, shallot, and leek, and refer to these as wu hun (五葷, ‘Five Spices’). One theory behind this Buddhist dietary restriction is that these vegetables have strong flavours which are supposed to excite the senses and, thus, represent a burden to Buddhists seeking to control their desires. Another theory is that these are all root crops, and harvesting them requires killing organisms in the soil. The latter explanation is accepted in the Jain religion that sprung up in India at the same time as Buddhism, and quite possibly influenced its practices. It is unclear, historically, what the original reason was for this restriction.

Alcohol and/or other drugs are also avoided by many Buddhists.

Only for some Buddhists

There are no universally agreed-upon rules for permitted and not-permitted foods in Buddhism. In some regions, it is common for monks to eat no meat and drink no alcohol, but for the laity to, or for the laity to abstain only when they visit a monastery. In some regions, even some Buddhist monks will eat meat or drink alcohol. In other regions, it is also common for Buddhists to believe that vegetarianism is better for their karma than eating meat, but to eat meat anyway and consider it something of a bad habit; and, in some areas, such as Japan, avoidance of wu hun foods is not a large part of Buddhism. Many Buddhist traditions state the Buddha himself taught that meat offered as charity to monks and nuns should not be refused, unless the killing was done specifically for the monks and nuns. However, other traditions state this to be inaccurate, and that the Buddha was strictly vegetarian.

While many debate Buddhist teachings, it is widely believed that the Buddha’s final words were, «Be a light unto thyself,» which might imply that he wanted each individual to choose their own path to Enlightenment; however, many Buddhists would ask what the sense of calling oneself a Buddhist is, if one is not trying to discern and follow the Buddha’s teachings on foods and all other issues. Conflicting aspects of Gautama Buddha’s teachings — compassion, The Five Precepts, and karma, versus the humility to accept meat and other things offered as charity — are not likely to be easily resolved, given the vagueness of written history.

Buddhist vegetarian chefs have become extremely creative in imitating meat using prepared wheat gluten, also known as «seitan» or «wheat meat», soy (such as tofu or tempeh), agar, and other plant products. Some of their recipes are the oldest and most-refined meat analogues in the world. Soy and wheat gluten are very versatile materials, because they can be manufactured into various shapes and textures, and they absorb flavourings (including, but not limited to, meat-like flavourings), whilst having very little flavour of their own. With the proper seasonings, they can mimic various kinds of meat quite closely.

Some of these Buddhist vegetarian chefs are in the many monasteries which serve wu hun and mock-meat (a.k.a. ‘meat analogues’) dishes to the monks and visitors (including non-Buddhists who often stay for a few hours or days, to Buddhists who are not monks, but staying overnight for anywhere up to weeks or months). Many Buddhist restaurants also serve vegetarian, vegan, non-alcoholic, and/or wu hun dishes. Some Buddhists eat vegetarian only once per week or month, or on special occasions such as annual visits to an ancestor’s grave. To cater to this type of customer, as well as full-time vegetarians, the menu of a Buddhist vegetarian restaurant usually shows no difference from a typical Chinese or far-Eastern restaurant, except that in recipes originally made to contain meat, a chicken flavoured soy or wheat gluten might be served instead (e.g. «General Tsao’s chicken» made with flavoured wheat gluten).