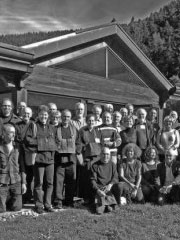 About 0.33 percent of Switzerland’s population are Buddhists. In 1978 the Swiss Buddhist Union (Schweizerische Buddhistische Union / Union Suisse des Bouddhistes / Unione Buddhista Svizzera) was founded by the Czech Buddhist Mirko Fryba (Bhikku Kusalananda). The SBU sees itself as an umbrella organization of the various Buddhist communities in Switzerland and does not represent a specific Buddhist school. It is open to all Buddhist beliefs and traditions based on «Buddhist values.» The SBU is a member of the European Buddhist Union.