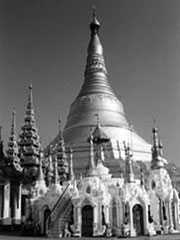 Burmese Buddhism is largely of the Theravada sect. Theravada means “Way of the Elders,» an implication that it is literally what Buddha taught. Theravada Buddhists resist the idea of Bodhisattvas and regard their system of beliefs as being purer and close to what The Buddha taught.

Buddhist history in Myanmar is related to Pagoda in Burma/Myanmar. Myanmar is often called the «Land of Pagodas». Shwedagon Pagoda is steeped in the religious faith of the people who have worshipped there for generations.