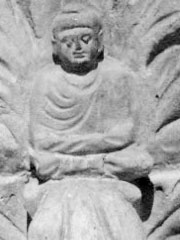 Several instances of interaction between Buddhism and the Roman world are documented by Classical and early Christian writers.

Roman historical accounts describe an embassy sent by the «Indian king Pandion (Pandya?), also named Porus,» to Caesar Augustus around 13 CE. The embassy was travelling with a diplomatic letter in Greek, and one of its members was a sramana who burned himself alive in Athens to demonstrate his faith. The event made a sensation and was described by Nicolaus of Damascus, who met the embassy at Antioch, and related by Strabo (XV,1,73 ) and Dio Cassius (liv, 9). A tomb was made to the sramana, still visible in the time of Plutarch, which bore the mention:

These accounts at least indicate that Indian religious men (Sramanas, to which the Buddhists belonged, as opposed to Hindu Brahmanas) were circulating in the Levant during the time of Jesus.

Some knowledge of Buddhism existed quite early in the West. In the 2nd century CE, Clement of Alexandria, the father of Christian dogmatism, wrote about the Buddha:

«Among the Indians are those philosophers also who follow the precepts of Boutta, whom they honour as a god on account of his extraordinary sanctity.» (Clement of Alexandria «The Stromata, or Miscellanies» Book I, Chapter XV ).

He also recognized Bactrian Buddhists (Sramanas) and Indian Gymnosophists for their influence on Greek thought:

«Thus philosophy, a thing of the highest utility, flourished in antiquity among the barbarians, shedding its light over the nations. And afterwards it came to Greece. First in its ranks were the prophets of the Egyptians; and the Chaldeans among the Assyrians; and the Druids among the Gauls; and the Sramanas among the Bactrians («Σαρμαναίοι Βάκτρων»); and the philosophers of the Celts; and the Magi of the Persians, who foretold the Saviour’s birth, and came into the land of Judaea guided by a star. The Indian gymnosophists are also in the number, and the other barbarian philosophers. And of these there are two classes, some of them called Sramanas («Σαρμάναι»), and others Brahmins («Βραφμαναι»).» (Clement of Alexandria «The Stromata, or Miscellanies» ).

Early 3rd century–4th century Christian writers such as Hippolytus and Epiphanius write about a Scythianus, who visited India around 50 CE from where he brought «the doctrine of the Two Principles». According to these writers, Scythianus’ pupil Terebinthus presented himself as a «Buddha» («He called himself a Buddas» Isaiah ). Terebinthus went to Palestine and Judaea («becoming known and condemned» Isaia), and ultimately settled in Babylon, where he transmitted his teachings to Mani, thereby creating the foundation of Manichaeism.

In the 3rd century, the Syrian writer and Christian Gnostic theologian Bar Daisan described his exchanges with the religious missions of holy men from India (Greek: Σαρμαναίοι, Sramanas), passing through Syria on their way to Elagabalus or another Severan dynasty Roman Emperor. His accounts were quoted by Porphyry (De abstin., iv, 17 ) and Stobaeus (Eccles., iii, 56, 141).

Finally, from the 3rd century to the 12th century, some Gnostic religions such as Manichaeism, which combined Christian, Hebrew and Buddhist influences (Mani, the founder of the religion, resided for some time in Kushan lands), spread throughout the Old World, to Gaul and Great Britain in the West, and to China in the East. Some leading Christian theologians such as Augustine of Hippo were Manichaeans before converting to orthodox Christianity.

Such exchanges, many more of which may have gone unrecorded, suggest that Buddhism may have had some influence on early Christianity: «Scholars have often considered the possibility that Buddhism influenced the early development of Christianity. They have drawn attention to many parallels concerning the births, lives, doctrines, and deaths of the Buddha and Jesus» (Bentley, «Old World Encounters»).