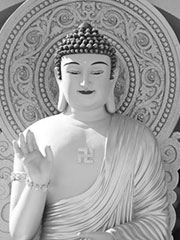 Buddharupa (literally, ‘Form of the Awakened One’) is the Sanskrit term used in Buddhism for statues or models of the Buddha.

Despite cultural and regional differences in the interpretations of texts about the life of the Buddha, there are some general guidelines to the attributes of a Buddharupa:

— Fingers and toes are elongated proportionately.

The elongated earlobes are vestiges of his life as a prince, when he wore extravagant jewellery. The «head protuberance» symbolises the loose connection between the mind and the body of a Buddha or Bodhisattva.

Appropriate uses of a Buddharupa

The Buddharupa most Westerners are familiar with is the Hotei «Happy» or «Laughing» Buddha. He is depicted as fat and happy, often travelling or bearing wealth. This is a Chinese image, and is in fact a Chinese Buddhist monk who so completely and totally embodied the buddha-nature of all sentient beings that he was considered to himself be a Buddha. The Buddharupas of India, Tibet, and the other Buddhist cultures usually depict a well proportioned figure, but sometimes he is shown emaciated, in recollection of his years of denial. He is sometimes shown reclining, recalling the Buddha Shakyamuni’s departure into final nirvana. Sometimes he is holding various symbolic objects, or making symbolic mudras (gestures). Japanese Buddharupas are often very square and stolid, while Indian and South-East Asian ones are often thin. The clothing also varies; in China and Japan, where it is considered socially improper for monks and nuns to expose the upper arm, the Buddharupa has a tunic and long sleeves, much like the traditional monks and nuns, while in India they are often topless.